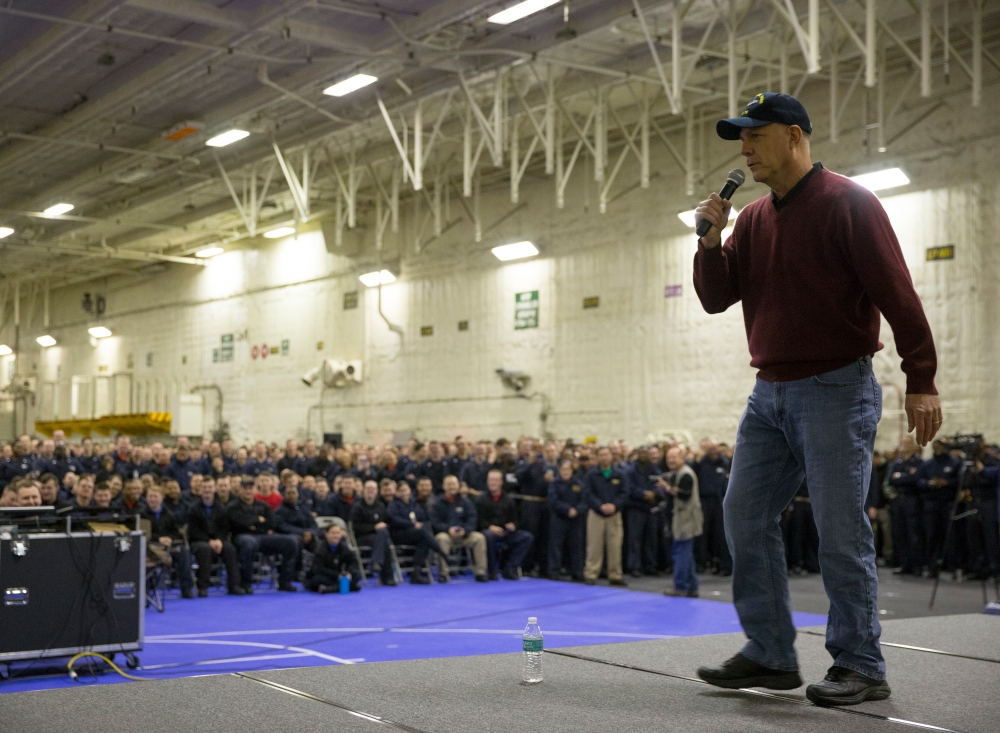 The screening was kept a surprise from the crew, which was assembled in the hangar bay that morning for an All Hands Call.

Capt. Richard McCormack, Ford’s commanding officer, joked with the crew, asking them if they knew the reason they were assembled, before handing the mic to Caldwell to “confirm or deny” the rumors that were going around.

When Caldwell confirmed that they were about to see a screening of “The Last Jedi,” the crew erupted into shouts and applause.

Many Ford Sailors had grown up watching the films, and felt deep connections to the saga.

“When I found out they were going to play ‘Star Wars’ I started freaking out,” said Aviation Boatswain’s Mate Third Class Tyanna Fitzmier, from Maize, Kansas. “This is amazing! I’ve been watching ‘Star Wars’ my whole life with my father. I even have tattoos of a death star and an imperial TIE fighter on my bicep. The fact that they are doing this for us is a big morale booster.”

“Going out to sea already makes me feel like I have goals to accomplish, and waking up to this news today makes me feel even better about all the work that I do,” said Aviation Boatswain’s Mate [Handling] Third Class Andrew Yanez, from Chicago. “This event alone is a great morale booster. The last time I felt the morale go this high was probably our first underway.”

A short “Star Wars” trivia contest followed Caldwell’s announcement, with crew members pitting their knowledge of the movies against each other.

Following the trivia contest, Caldwell thanked Ford Sailors for their service, stating that while many movies are filmed about heroes, “you’re the real heroes, believe me. I thank you for your dedication, for your service, and I just want to say, ‘God bless you all’. Get home safe…and let’s roll this film.”

Reactions to the screening generated an enthusiastic response from the crew.

“It was an amazing movie, but being able to see it at sea made it even more memorable,” said Mass Communication Specialist Second Class Kris Ruiz, from Kansas City, Missouri. “This is the first time I’ve ever seen a special screening. It was definitely a surprise, and everyone had a good time watching the movie as a crew.”

“Once I heard [the announcement] with my own ears my heart dropped,” said Aviation Boatswain’s Mate Airman Marc Cirocco. “I’ve seen all the films, I’m a huge fan. This just goes to show how much our command cares about us Sailors.”